How to become Dutch…

I, Rodney, recently had to take a language test as a part of the program of integration of foreigners here in The Netherlands. Last year, I was required to start an 18-month integration course, but after taking the intake test, it became clear that I no longer needed to take the course and was instead advised to test out of it.

Thankfully, I passed with flying colors and am considered by the Dutch government to be fully “integrated” into Dutch society. Although this was one of the prerequisites for getting Dutch citizenship, I’m still no closer to getting it, since they require Jolanda to have a certain monthly income (makes sense, really), but they don’t consider the gifts we receive to be income. Makes it nice at tax-time, of course, but it would be nice to not have to shell out the $220 every year for a Dutch residence permit.

As leader of YWAM Europe’s Communication Team (EuroCom), I will be attending the yearly International Communication Team leaders meetings. This year it is being held in Chiang Mai, Thailand. This will be a time of re-connecting with other communication teams from around the world, evaluating our progress, discussing working in virtual teams, the training that comm teams are offering and/or planning for YWAM staff and fundraising for a comm team. There will also be workshops given (I will be giving one on setting up a website) and of course we will be taking time to pray for each other.

Jolanda serving at a sponsor dinner

Last week, Heidebeek held another Love Feast, this time for the students of the Mercy Ministry DTS and their guests. The dining hall was filled to capacity with the students, their parents, pastors and friends. Jolanda again took the challenge upon herself to organize this important event, allowing the students and their guests to experience a little bit of God’s heart for hospitality, which is one of YWAM’s core values. 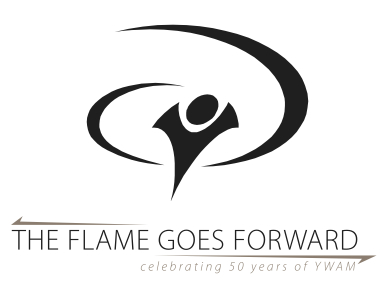 YWAM’s story starts more than a half-century ago, when in 1956 Loren Cunningham, YWAM’s founder received a vision where he saw waves of young people washing up onto the continents, bringing the Gospel of Jesus. That was the beginning of a dream.

The mission’s movement started in 1960 has since spread out over the whole world. Today, approximately 16,000 YWAMers operate out of 1,000 plus locations in more than 150 countries. Jolanda and I have been YWAM staff since 1997 and together with 90 other co-workers like ourselves, are continuing to make this original dream a reality.

In 2010 YWAM celebrates a life-changing vision, a world-changing movement and an international family that holds an eternal flame in their hearts. We celebrate knowing God… His everlasting faithfulness, goodness, power and love. We celebrate the privilege of making Him known in all nations, all tongues, all peoples… lighting the torches of the future entrusted to each of us. We celebrate 50 years of Youth With a Mission. For more inspiring videos and stories, check out YWAM’s 50th anniversary website: ywam50.com

Thank you for taking the time again to read our latest update.

We would love to hear from you if you have any questions or comments.

Blessings from The Netherlands,
Rodney, Jolanda, Lisa and Sarah